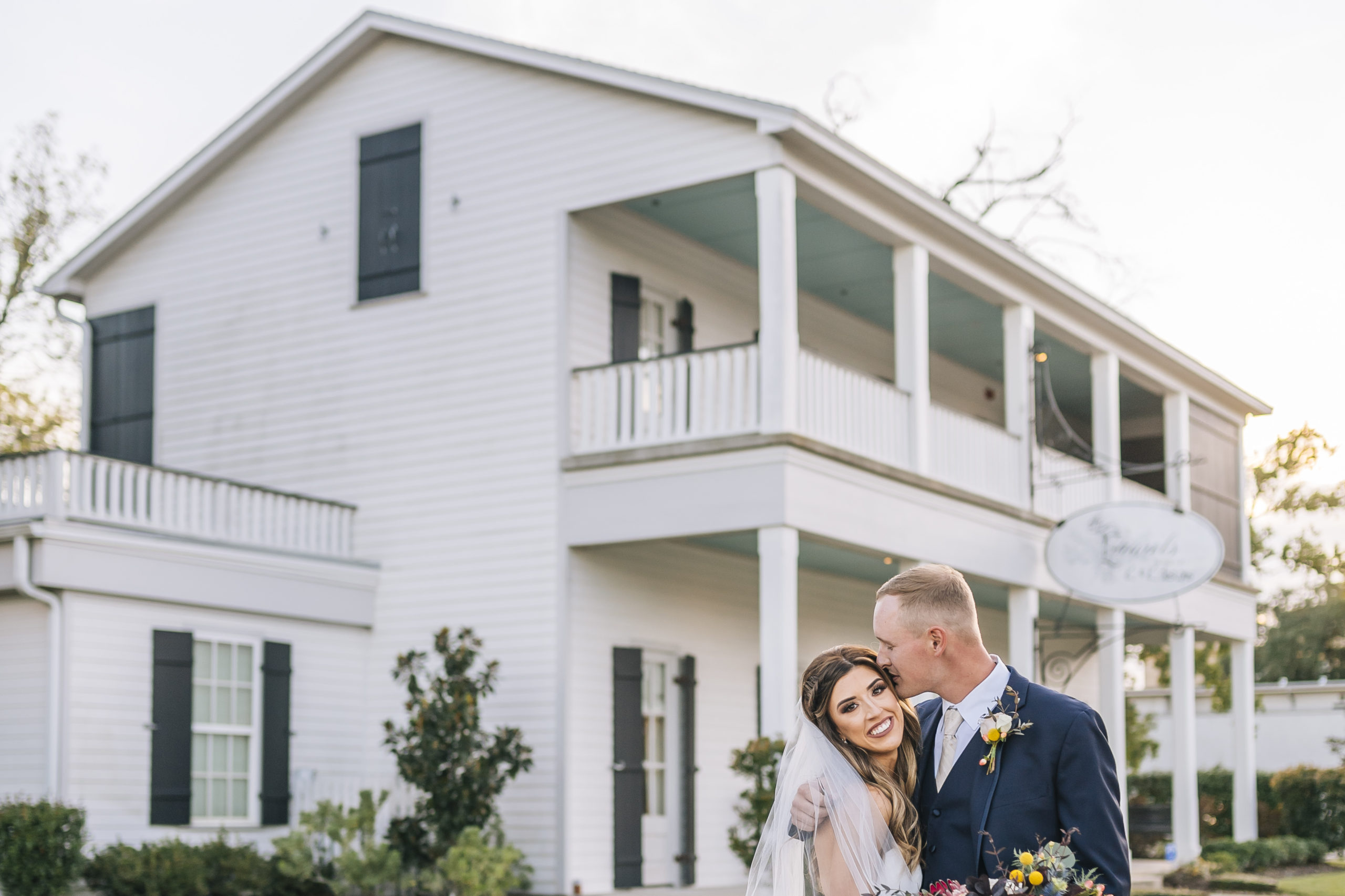 When Angie came to us last year to plan her wedding she had her venue and that was about it.  We began talking and throwing around ideas that were as sophisticated as she was and before we knew it a concept was born. She wanted to keep things simple, classic and beautiful. We also wanted to embrace the fact that our bride to be was about to move halfway across the country to California to start her new life with her fiance, Chris.  She and Chris both liked the color blue so we started with that and I remember her saying that everything in California is so pretty and green, so green it is! The outcome was stunning.

We started with the linens which were a combination of white, blue and green.  The base of the tables were a crisp white with sophisticated navy overlays. The chairs were also adorned with the white chair covers but instead of using the navy sashes we used one of the most beautiful greens that we have ever worked with! Isn’t it fabulous?! At the bride and groom’s table we adorned their chairs with navy chair covers and custom bride and groom sashes trimmed out in green. 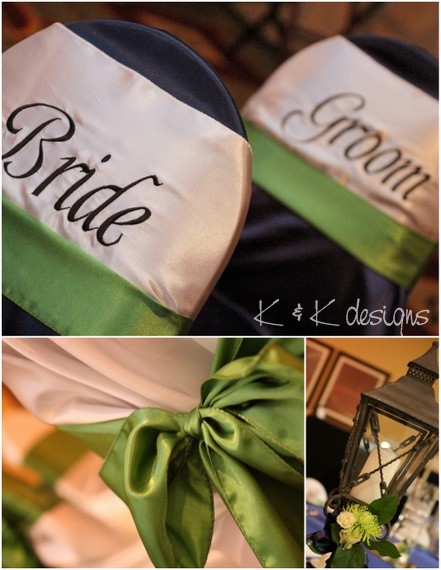 For the flowers Angie wanted to keep it classic and simple. We went with all white blooms and used multiple types of greenery to tie the arrangements into the color concept of blue and green.  The outcome was stunning and sophisticated, just like out bride! 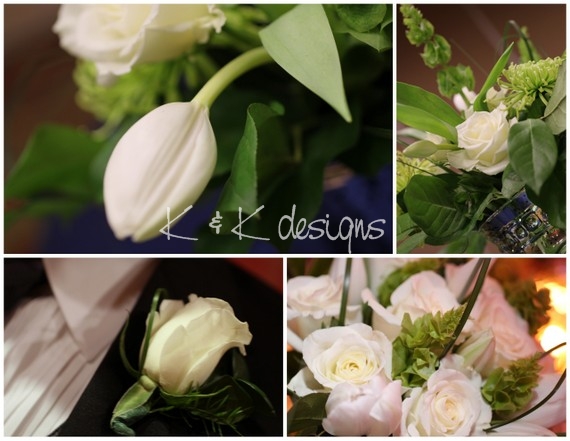 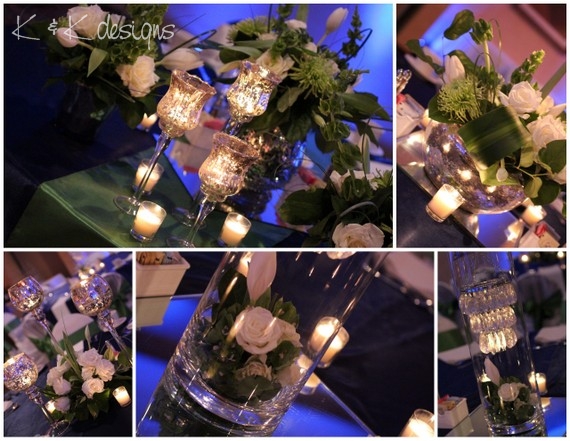 For the cake table we used the navy tablecloths with a green runner bounced down the center and added lots of flickering candles there as well.  We also used our always popular ribbon backdrop with varying shades of blue and green ribbon. 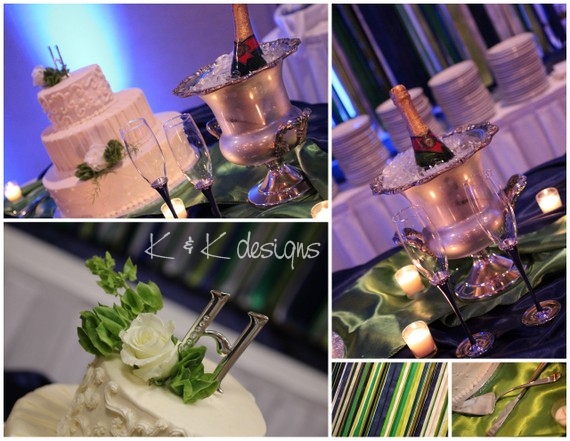 Since the couple were getting married in the same room as the reception we had to create a place befitting a wedding ceremony. We created an aisle with 6 free standing lanterns  that we have and adorned them with a simple flower arrangement.  The backdrop for the ceremony was a beautiful iron arch that we have and a four arm lantern stand. 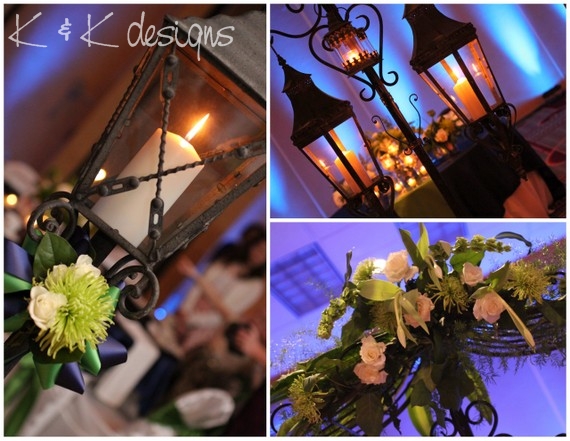 On the sign in table we made a beautiful custom sign based off of the invitations we designed for them. We also had a free standing birdcage for guest to drop their cards and well wishes into. 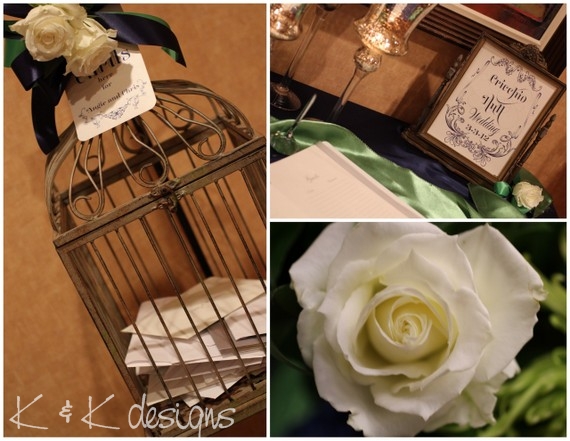 And no K & K event would be complete without some personalization! We made custom water bottles that were used as favors and were a huge hit with all of the dancing that was going on. We also created reserved signs and place cards to coordinate with everything else. 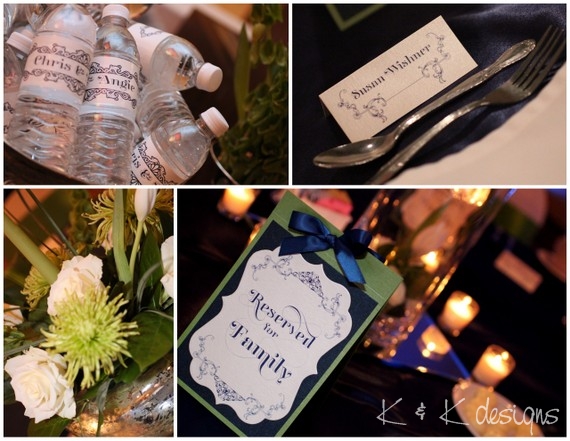 We so enjoyed working with Angie and Chris along with Angie’s parents in creating the wedding of their dreams. They were such a pleasure to work with and everything went so smoothly despite planning a wedding with a bride that lives all the way in California.  We wish you both years and years of happiness and blessings!

From the newlyweds: “We want to begin by thanking K & K for their gentle supervision and exceptional care taken during the days prior to our wedding and especially on our wedding day!  A simple concept in the beginning became a wedding beyond our expectations!  Everything was on schedule, on budget and on task!  Every detail addressed and no stone left unturned!  We cannot imagine planning such a special occasion without you!  I know it’s rarely said (if ever) that panning a wedding is easy and fun…. well, K & K made it so! Thanks a million! — Chris & Angie (Cricchio) Hull” 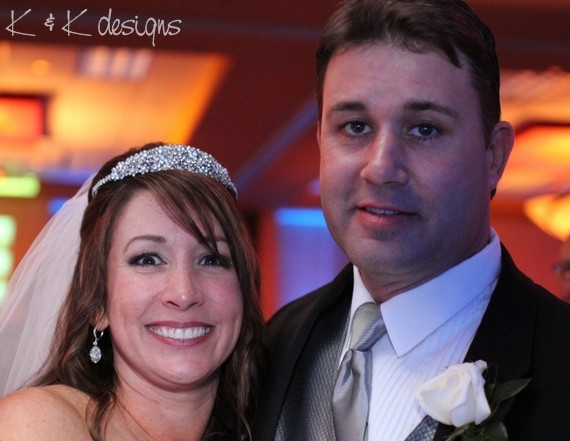 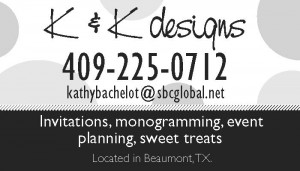